As the title says I am back blogging and hopefully more regularly than once a year.

As many of you are aware I have had a bit of problem with the bladder. Well, it now seems to be righting its self. The tumour which was a T2 and has now shrunk to a T1 and perhaps by the time they take another look in June it might not even be there. For sure the symptoms that brought my attention to the fact that all was not as it should be have long gone!

Clinical suggestions were that the bladder needed to be removed however, after looking at the pro's and con's, also taking into consideration my age 79. I decided not to have that done because I want quality of life not quantity.

I did though agree to have a short course of Chemotherapy. What an eye opener that was !

I shall not to go into details, other than to say it was one of the most miserable experiences of my life and would not wish it upon my worst enemy. A week or two after the course I received a phone call from the senior Oncologist who informed me that there was no cancer in my body other than what may remain in the bladder. I was walking on air for several days afterwards !

Throughout the treatment I had no hair loss which was just as well because I don't have much anyway! And the only effect I noticed was that my finger nails are now slower to grow.

On the home front our old dog Toby, aged 18 was put to sleep last month as he had lost the use of his legs; its was not sudden for we had seen him steadily weakening over the last while.

A dark cloud of grief hung over us for a few weeks and then came the decision to get another dog. We chose a Labrador cross Collie, black with a white star on his chest with a few small bits of white on his body; we have named him Seànie. |He was born at Halloween in Tipperary and is now virtually house trained too! He has filled that empty sad place in our hearts and is very well behaved as well as having some puppy traits like chewing the odd shoe but not anymore for we have tidied up and put them beyond his reach.

So stay safe all of you !

In and out of a Dark place

In the latter part of 2019 I was diagnosed with cancer in my bladder and since then have had two courses of BCG treatments. Each of which was six weeks long with a three month break and numerous other procedures in-between.

Well ! What can I say except that I went into a dark place for awhile... until I reached an understanding within that there were a few other times that I came close to losing my life. I shall not enumerate them here; except that one was when I nearly drowned and saw as, I sank to the bottom my oxygen bubbles going upwards in the green silent water.

A few weeks ago we (Mrs H and I) met with the Urology Consultant of Tallaght University Hospital a teaching hospital in County Dublin, Ireland, whose academic partner is Trinity College Dublin. He informed us that my cancer has now invaded the muscle bladder and that the best thing to do is to remove the bladder along with the prostrate - this surprised me because I have never had a problem with it. Ah' well that's the way the cookie crumbles.

This week we had a meeting with actual Consultant who will be removing the offending organ. He detailed the various procedures that will be performed during the operation and detailed the recovery care afterwards etc.

Prior to the removal I shall be having a meeting with the Chemotherapy Professor who will access my suitability and then pass me forward to the Anesthatist - I feel that I should share with you all that the very first time that the surgeons removed foreign bits from the bladder the effects of the anaesthetic left me HAPPILY hallucinating for two days afterwards and I recall standing on the roof of Tallaght Hospital and seeing Mrs H driving along the approach road, I was so floaty !

I think that I ought to cease now just in case I relapse into that space again. So take care all you and I will catch up with you all later xx

Recently while I was drinking coffee outside of the Russell Gallery at New Quay, Co. Clare I had a lucid experience of a strange happening on the far shore of Aughinish, between sea caves in the cliff and the ruins of a derelict farm house close to the pebbled beach.

Being so moved I decided to write a poem about my experiences.

Figures of every age converse

convivially move as before.

on death’s opposite shore.

Once again I am sharing with you a recent painting of mine of the Co. Clare coastline - the time of day is sunrise and the month was May. Almost a year has gone by of since I took note of the colours and made pencil sketches of that clear and silent early morning.

My medium is as always oils, for I appreciate the stretch and plasticity that enables me to blend and build up the layers until my desire is achieved.

We have the use of a holiday home off the beaten track that sits almost on the waters edge, high enough up to be safe in a storm and close enough that none can build in front of us. It suits all of our requirements like no other property could.

Unfortunately due to this wretched global virus our next visit may not be until September; I realise that there are many who are alive today that possibly may not be so in a few weeks time and that truly saddens me. I cannot help but liken the number of fatalities world-wide to the war time conditions that prevailed in WW2 (I was born early January 1943).

The heroes of this crisis are surely the medical staff and ancillary workers of every hospital and facility that is dealing with the casualties. There is and will be much counselling to be done among the relatives and close friends of the victims.
I am cocooned here at home in the heart of the Irish countryside and wish you all the best of health. Stay safe.

*****
As ever I am still unable to reply to your comments yet rest assured
that I do read and welcome your words !
Posted by A Heron's View at 16:47 7 comments:

Not in any order.


Sitting here in splendid isolation the silence is deafening as I hear the grass grow and the crackles of trees as leaves start to pop out in an un-peaceful rural way. 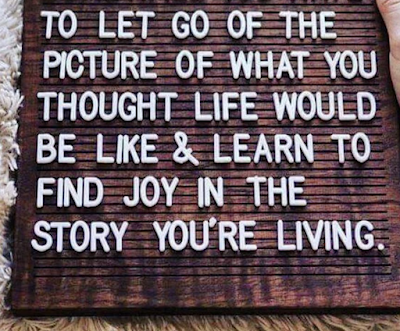 On seeing this
I obliquely answered

"I prefer to be my wayward self sitting here under a mottled sky watching the birds fly..."

and to an anonymous question I said

I have lost all enthusiasm in blogging and  even reading those of others ! Yet I am loathe to close down a herons view lest I change my mind at some future time.

My attempts at writing poetry has left me high and dry too however, I have returned to my brushes and oils to past the time with and enjoying myself immensely.

Below one of my recent paintings 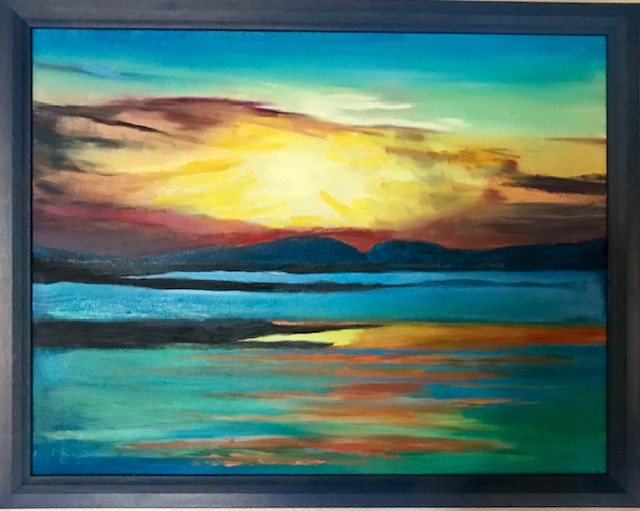 
Please Note I am unable to respond to any of your comments, all of which are very welcome and it is not my fault or even that my O.S. the problem is either Google and or one of their subsidiaries = such as Blogger ! 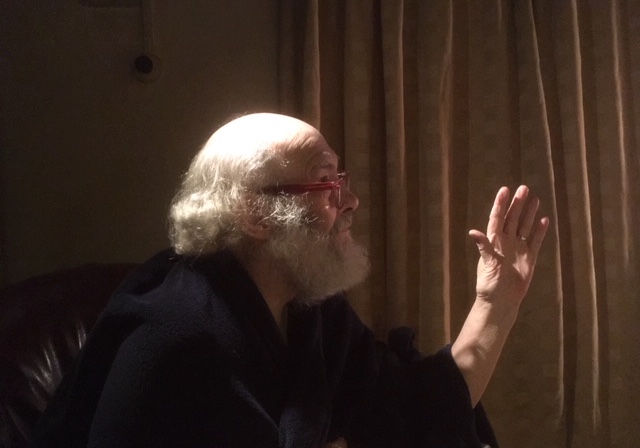 There are times when every learned person has the duty of stepping up to the line and of explaining the intricacies of life from their own deep well of knowledge.

This was one of those times.

My thanks to all who have left a comment including Colonel Blimp alias Cro Magnon who can never be polite no matter how hard he tries.
Posted by A Heron's View at 12:34 8 comments:

I often keep a look out for interesting and unusual things when I am out and about to use as blog topics and a few days before Christmas I was in awe to observe a hearse in Lidl's car park. We did look and it was empty at the time. 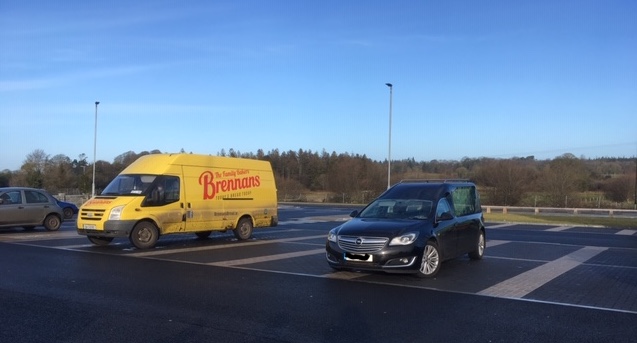 Later as we were leaving I noticed a fellow customer walking across the car park carrying several large frozen turkeys, he seemed to be heading in the direction of the hearse.
Mrs H went off to investigate.
As they were chatting the man put down his burden and opened the passenger door.
Out fell several more very large frozen turkey carcasses.
Obviously imbued with Christmas spirit he then tried to stuff them all onto the seat and into the footwell. Mrs H helped, secretly hoping that he would open the rear door and place them in a line where the coffin would normally rest.
It was not to be, so wishing him season's greetings we drove away still wondering why an undertaker would want so many frozen turkeys.
Answers below please.
Posted by A Heron's View at 13:30 11 comments:

My favourite tipple at this time of the year

home made blend of Vodka and Polish Cherry juice

Still a problem leaving comments on my own blog
and yet I was able to leave one.
Strange things are occurring in the blogging world! 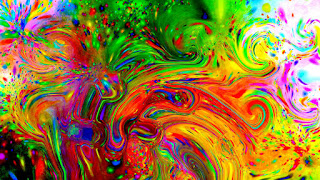 In a moment of haste I deleted A Herons' View.  That decision was probably caused by a cocktail of drugs that was administered to me by the anaesthetist prior to a procedure in a prominent Dublin hospital.

Never in my life have I ever been quite so stoned for such a long time, the hallucinations seemed to go on for hours on end and only truly ceased when Mrs H called in a friend to give me an extended reflexology treatment.

Oh bless their cotton socks! That really did work by returning me back to planet earth very quickly.

I mentioned my experiences to my GP who laughed out loud and said "Well Mel that's because we keep the best for ourselves !"

I suppose one good thing did come about though. I posted my stash of pipe tobacco to a friend - minus my pipe which I have been unable to locate - so that is the end of my pipe smoking days.

My treatment is not yet finished and I can foresee several visits more which I will try to keep a handle on without acting so rashly in the future.
Posted by A Heron's View at 17:26 10 comments: