I do not call myself a Christian, a humanist is as close as I can get.

Recently I have found my self feeling absolutely disgusted with the very shameful attitude of the settled community of the Rockville Drive residents in Carrickmines who opposed the emergency halting site; this towards their fellow citizens namely The Travellers.

So I was glad to read the following on the RTE web site because it needed to be voiced. 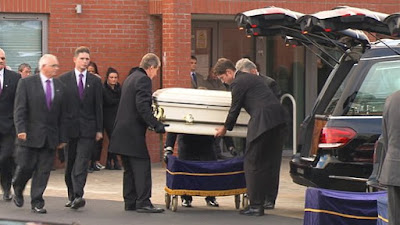 "A priest has criticised many settled people for failing to empathise with what he called their Traveller brothers and sisters following a fatal fire at a halting site.

Father Dermot Lane was speaking after the remains of five of the people who lost their lives in the fire in Carrickmines were brought to the Church of the Ascension of the Lord in Balally, Co Dublin this evening.

Fr Lane, who is the parish priest of Balally, not far from Carrickmines, urged everybody to become involved in a new consultation process embracing local authorities and the settled and Traveller communities.

He prayed that what he called the national tragedy which struck eleven days ago may become a turning point in the difficult tasks of healing, reconciliation and mutual trust that lie ahead.

Fr Lane greeted the Connors family and hundreds of other mourners at the church after five hearses bearing the coffins of Thomas and Sylvia Connors and their children Jim, Christy, and baby Mary arrived for their removal service.

Fr Lane said the grief of the Connors family is also the grief of Balally Parish because they were, and are, an important part of the local community.

Describing them as well-known and respected in the parish, he said they worshipped in its church where Thomas and Sylvia, conscientiously as parents, presented their five children for baptism over the past seven years.

He recalled having the privilege of baptising Michael and Thomas Connors, the family's only survivors.

He said important lessons are to be learned from the national tragedy that claimed ten lives 11 days ago and which "has disturbed the consciences of us all".

Unaware of the resolution of the impasse over the local authority allocating the grieving families accommodation, which coincided with the church service, he urged that they be offered an appropriate place to live as soon as possible.

He told the congregation: "We must learn, above all, to walk in the shoes of the other if we are to develop genuinely inclusive and pluralistic societies."

And he observed that many settled people had "failed to walk with empathy in the shoes of our brothers and sisters in the Traveller community".

Dismissing blame-games about the tragedy as unhelpful, Fr Lane urged everybody to move beyond mis-understanding, standard stereotypes and caricatures.

"If we are to move forward," he said, "all must be involved in a new consultation and a new conversation, and that means bringing together local authorities, local communities and the Traveller Communities."

Fr Lane prayed that the tragedy - which he repeated was national in character - may become a turning point in what he called "the difficult tasks of healing, reconciliation and mutual trust that lie ahead".

He said  the tragedy has raised serious questions about our priorities as a society, and searching questions about the responses or lack of responses by successive governments to a variety of reports going back 50 years, to the mid-1960s.

In the meantime, he said, the Connors family must be allowed to grieve and to mourn the death of their loved ones.

The funeral Mass for the Connors will be celebrated in Balally at 11.30am tomorrow and they will be buried together on Friday in Wexford."

An article worth reading can be found here
http://www.independent.ie/irish-news/apartheid-hasnt-gone-away-when-it-comes-to-travellers-34137234.html
Posted by A Heron's View at 05:25