The previous blog about Lough Boora Parklands and the next four blogs (including this one) are of places that we visited on the same day.

This is number two.

Moving from the bog lands of the big sky at LBP our route took us across open countryside and along straight, narrow roads that seemed to last forever. We chose to have lunch in Ferbane, the largest, small town in the locality where The Black Boot Restaurant catered for our needs. Mine were simple: a large pot of tea which provided me with several cupfuls, followed by a dish of jelly,custard and cream. It was delicious. My companions made up for my meagreness and had a decent sized lunch each.

Our next destination was the ruins of Clonmacnoise, an ancient monastic settlement that sits on the banks of the River Shannon and where, in my mind, the river becomes a serpent as it twists first one way and then another. From the Shannon Pot in County Cavan through thirteen counties of Ireland the river travels 390km to enter the Atlantic Ocean in the Shannon estuary.

The Shannon Pot, in the shadow of the Cuilcagh Mountains, has a famous legend: A granddaughter of Manannán mac Lír visited the mystical pool to eat fruit from the forbidden tree, or The Tree of Knowledge, which was planted by the Druids. As she began to eat, the waters of the pool sprang up and drowned her. The name of this young woman was Sionainn, Goddess of the River Shannon. Senuna is her earlier name meaning 'the old honoured one'.

On approaching Clonmacnoise, from the Shannonbridge direction, we first saw the toppled ruins of an Anglo-Norman castle built in 1214. It was the second such structure here and replaced a wooden castle destroyed by fire and possibly by Viking marauders.

The primary function of the castle was to enable the Anglo-Normans to gain control over the midlands and guard an adjacent bridge which spanned the Shannon. This castle too was destroyed in the late 13th to early 14th century. 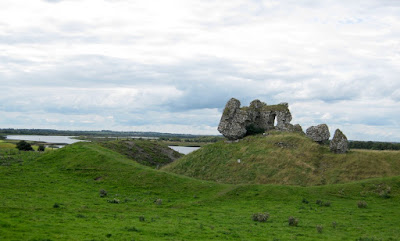 The Anglo-Norman ruins
The pilgrims to Clonmacnoise would mainly have walked or have rode on their small horses. 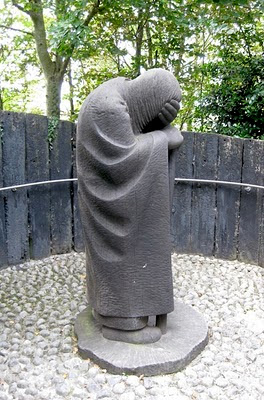 A sculpture of a pilgrim
(I wonder if he was shocked by the entrance fee!)
Alternatively were he or she a person of means then they may well have travelled here by boat 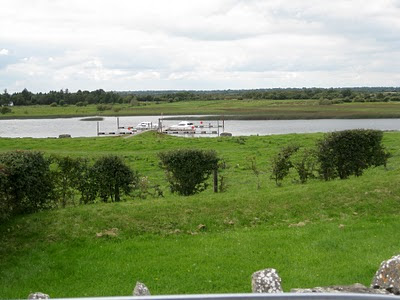 Moorings for the Clonmacnoise visitors of today
All around Ireland at the ancient monastic sites round towers are to be found, some are very well preserved others are not. As to why they were built there are as many ideas as there are towers. 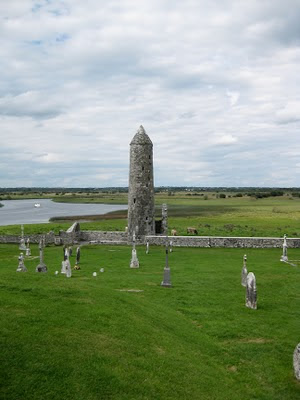 One proposition is that they were a refuge
from unwanted visitors!
The monastery was founded between 545 & 548 AD and built in wood, these were replaced with stone buildings in the 9th century. Its' greatest period of growth came between the 8th & 12th centuries during which time it was attacked frequently mostly by the Irish (at least 27 times), also by the Vikings (approx. 7 times) and the Anglo-Normans (approx. 6 times). 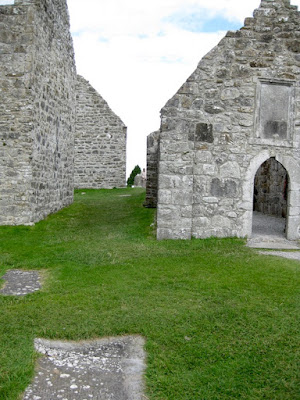 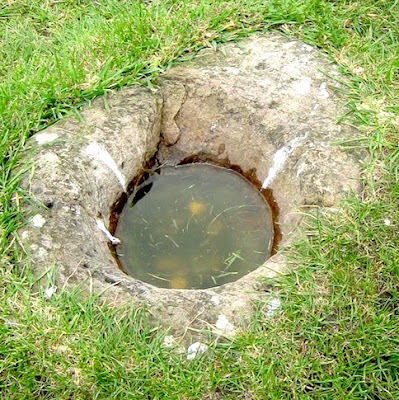 A balluan stone.
Once again ideas abound on what the original use was wether it was for the grinding of grain or for toning. Though certainly not as a wishing well as can be seen here. On a personal level I abhorr the idea of throwing coins into water from which humans or animals might drink from and become poisoned. 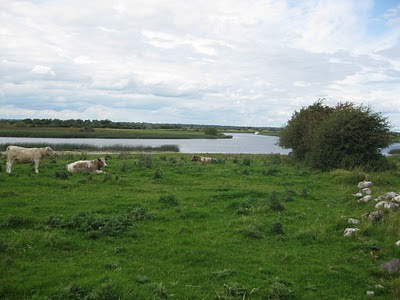 The great Shannon flows past the Clonmacnoise lands
and separates the Midlands from the West of Ireland
for on the opposite bank is Co.Galway.
Close to the monastery is what I feel is the 'jewel in the crown' and it is that gem that the next blog will be about.
Posted by A Heron's View at 17:52