The Jewel of Clonmacnoise (part 3)

The Route to the Nun's Church
©GoogleEarth

The jewel of Clonmacnoise sits about a quarter of a mile north, beyond the boundary of the monastery, with easy access via the modern cemetery leading to a narrow road. Walking this road we were very fortunate that it was a fine dry day, for it allowed us to take note of what was around us and our friend Fred (who is often seen on this blog) said 'Hey is this a ballaun stone?' We stopped, looked and were not totally sure. The words from a former job came into my mind - "investigation will reveal". So I knelt down and dug with my hands into the soft earth at the roadside to clear half of the debris away, then to feel gently under the remainder to find smooth stone, this was indeed an unmarked ballaun stone. 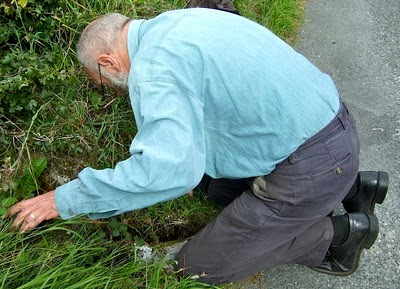 Down on my knees
With my hands in the mud trying to discover whether this was a ballaun stone. I was thinking on whose jacket I was going to wipe them if this just a stone drain! 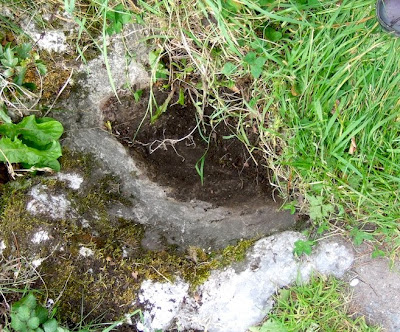 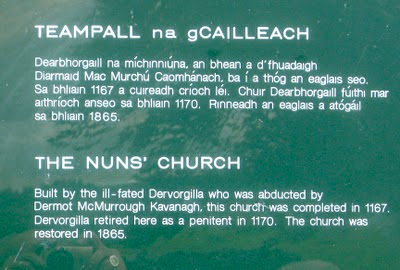 The story of Dermot MacMurrough during the Anglo Norman conquest of Ireland resembles a soap opera, pitting the wily, deceitful villain (Dermot) against the well meaning but hapless incompetent (Tiernan O'Rourke).

MacMurrough and O'Rourke were mortal enemies. The antagonism between them dated to 1152, when O'Rourke had been humiliated by MacMurrough's abduction of O'Rourke's wife, Dervorgilla. But MacMurrough may not have been as culpable as it seemed.

For according to Irish folklore, it was Dervorgilla herself, then aged 44, who arranged the abduction, with MacMurrough, aged 42, simply going along. Nevertheless, MacMurrough was hardly an innocent bystander, having eagerly accepted the invitation, and having staged a realistic abduction, with horsemen and screaming victim. O'Rourke recovered Dervorgilla the following year (1153), but he never got the revenge he wanted.

The subsequent hostilities between O'Rourke and MacMurrough were played out in the context of a larger battle between Rory O'Connor and Murtaugh MacLochlain for the high kingship of Ireland. O'Rourke was allied with O'Connor, the eventual winner, while MacMurrough supported, and more importantly was protected by, MacLochlain.

In 1166, finally, after a 10 year war, O'Connor defeated MacLochlain once and for all. O'Connor was magnanimous in victory. He reduced MacLochlain's petit-kingdom to a small area, and took hostages, but otherwise permitted him to live out his reign.

O'Rourke had no intention of extending similar generosity to MacMurrough. He got his revenge later that same year when MacLochlain (MacMurrough's long time protector) died, and O'Rourke, along with several cohorts, forced MacMurrough to flee Ireland.

But MacMurrough quickly regrouped. He sought help from Henry II, the aforementioned Norman ruler of the Angevin empire. To Henry, MacMurrough represented opportunity knocking. Henry had no enthusiasm for personally leading an expedition to Ireland but he had nothing to lose by encouraging MacMurrough. Thus Henry issued an open letter to his subjects, authorizing them to render military assistance to MacMurrough.

MacMurrough then contacted one of the great Anglo Norman leaders in Wales, the legendary "Strongbow" Initially, Strongbow was reluctant, but then MacMurrough offered Strongbow his eldest daughter, Aoife (Eva), in marriage, together with the right to succeed MacMurrough as king of Leinster. Finally, Strongbow agreed to lead an army into Ireland to restore MacMurrough to power.

The consequences of the above: led to the British occupation of Ireland for nearly 800 years !

Dervogilla died at the age of 86 in Mellifont Abbey, Co. Louth.

With thanks to Desmond's Concise History of Ireland 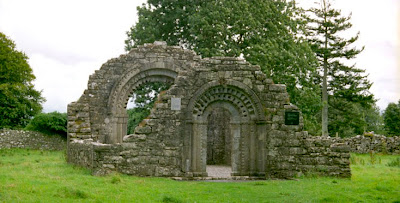 Ruins of the Nun's Church

This was my first ever visit to the Nun's Church as I only knew about it from reading a novel even though I had visited the ruins of the monastery many times before. The church doesn't seem to be as popular and even on that day the number of visitor's could be counted on one hand. Beyond the hedge on the right hand side of the road there is a long mound, which I feel may well have been an ancient dry route that connected the two sites in times of flood. 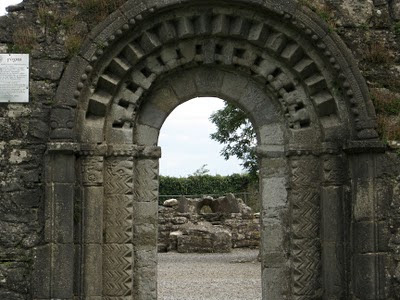 I refer to the Nun's Church as a jewel because of the 'energy' that is so very tangible there, in such places I feel and leave invigorated. I enjoy re-visiting places where the 'energy' strengthens my inner being and this is the only church that has done this for me.

In part 4 we cross the River Shannon to visit a mermaid and later we meet a big eared lady. 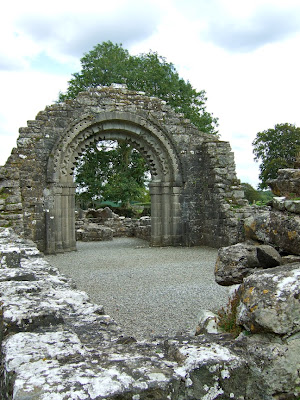