Across the Shannon, in the eastern part of County Galway, lies the historical townland* of Clonfert (As Gaeilge "Cluain Feart" meaning 'meadow of the grave') which formerly had one of the many Celtic Christian monastic settlements of the 5th/6th century. Today all that remains is a lovely, small cathedral whose founder was Saint Brendan the Navigator; it is said to be the oldest living church in Ireland with an unbroken history of public worship. 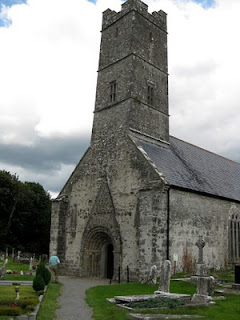 The Cathedral of St Brendan with its' monastery college was founded in the 6th century and flourished for hundreds of years, suffering many raids by the Vikings who frequently sailed up the River Shannon from Limerick. It was burnt down in 1016, 1164, and again in 1179.

The monastery and most of the church were destroyed in 1541 and the monastery was not rebuilt after this final assault. Prior to the destruction of the monastery college in the early sixteenth century it flourished with as many as three thousand students being educated here at one time. Recorded in a state paper of Queen Elizabeth the First is a proposal to found a University at Clonfert, it being a celebrated seat of learning in the centre of Ireland and a convenient place for Irish students. The proposition was rejected however and Dublin obtained the Charter leading to the foundation of Trinity College Dublin in 1592. 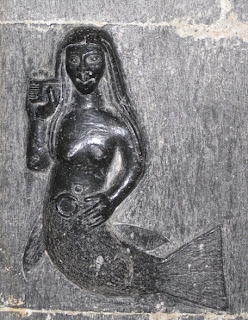 It is here in the cathedral, on the entrance to chancel, that we discovered the mermaid.

About 10 inches high she is complete with comb and mirror and has been rubbed to a shine by visitors. 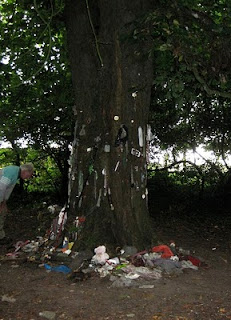 Next to the cathedral lies a small woodland and we stopped to pay a visit to the rag tree where people leave offerings to their god(s) in the hope of cures and the fulfilment of wishes or prayers.

We travelled south of Clonfert and across one of the few Shannon bridges to the ancient town of Banagher ( Beannchar na Sionna meaning 'place of the pointed rocks'), County Offaly. From here the 'big eared lady' is about 3km away though not visible from the road. She is a Sheela na Gig sitting 20metres up on the end wall of the ruins of Garry Castle whose ancient owners, the MacCoughlans, had many strongholds in the area. 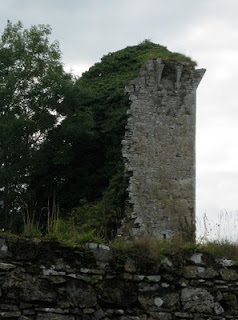 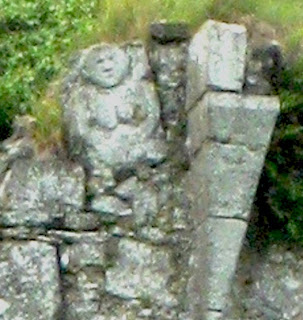 purpose is unknown. Sheelas that are still in situ and accessible are often rubbed by women

wishing to conceive and are often known as hags or the witch on the wall.

Townland: is the smallest geographical unit in the Irish census returns and are still in use today. Anything from 5 to 30 townlands may be grouped together to form a civil parish. A townland can vary in size from the smallest, of less than an acre to over 7,000 acres (an average size is 200-400 acres ) There are over 62,000 townlands in Ireland and are generally named after natural or geological features.