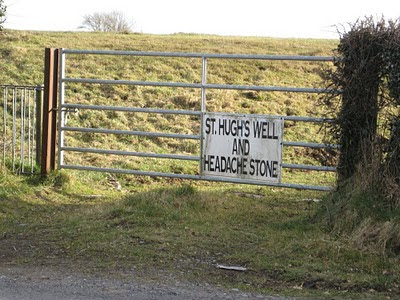 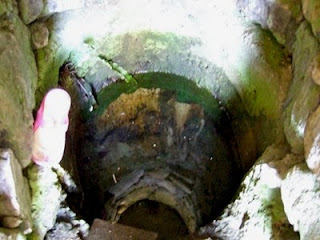 Well with token offering of a baby's shoe 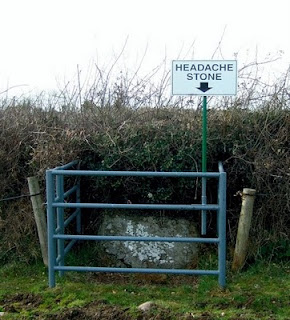 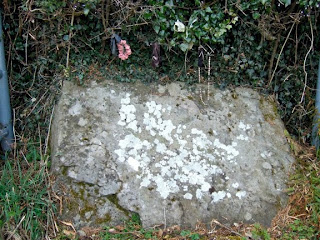 Here the sufferer lays their head & is cured.

On sunny Sunday it was a genuine relief to step outside and feel the warmth of the sun on one's body. So we took the decision to make a short tour to the Headache Stone, a place which we had passed on an inclement winter's day last year.

The sign on the gate depicts it as St Hugh's which is unfortunate because it is actually St. Aedh's (pronounced as 'aeh')

St Hugh or rather St. Aedh who was one of Ireland's primitive saints (The Royal Society of Antiquaries 1896) and his importance is that he reputedly cured St Bridget of a headache.

I had heard that it is best not to put a pain free head on a headache stone, because it is likely that you will then get one ! This advice I related to Mrs H as she set off to take photo's while Toby (dog) & I kept each other company. Not lazy merely cautious because there were sheep & young lambs close by and I like to obey the Countryside code. Mrs H had only been gone a few minutes when there came a loud bellow from a Bull, it is a very distinctive noise; this again reassured me by not taking Toby was the right decision and as I had not heard any screaming ! I guessed that Mrs H was free from harm and I was right as you can see from the photo's !

What I wanted to know was exactly how did St A manage to go from A to H there being no phonetic similarity. Research via Google has revealed :-

This quatrain refers to the time when there was constant and friendly communication between the schools and churches of Ireland and the Welsh and English coasts, when Welsh students came to study in the Irish colleges, and brought back with them to Wales many Irish traditions that can still be recognised in Welsh literature. This was the time when Alfred, a student in Ireland, laid the foundations of that love for learning which afterwards caused him to solicit the aid of his former Irish professors in founding the first University of Oxford. The quatrain also contains the name of one of our saints, a name disguised more effectually than any other, that of St. Aedh, if we may venture to call him so. Aedh is really his name. It is one of the commonest Irish names, and is now represented in English by Hugh, a name with which it has no connection whatever. Ref www.libraryireland.com