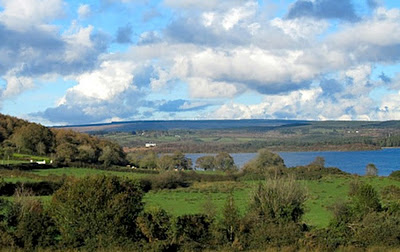 I have met and spoken with others who have seen the Faeries. One man told me that he was strolling through the woodlands that border Lough Graney, (Lake of the Sun) in Co. Clare, when he saw colourful, lithe figures swinging in the branches of the trees. He said that some were as small as children, others as large as himself (he was about 5ft 6") and most were much larger. As he neared to them they swiftly vanished except for the feeling that the air felt as if it were electrically charged.

One night during a ritual a friend and myself became aware of a stream of miniature, multi-coloured lights flowing up and out of an old boreen to fix on to the branches of a hawthorn tree. Those lights twinkled away throughout the ceremony and only disappeared when we were finished.

Faery Paths are very like ley-lines in that they carry energy and respond to a divining rod or to a pendulum. It is not a good idea to build on them for very often people who move into such homes live a very disturbed life and generally end up moving elsewhere. There is an old place a few miles from me that has been sold at least twice and nobody lives in it more than a few weeks. It has now stood empty for several years.

During the recent building boom a new property was built in our locality. The architects visited me to talk about water and whilst we were conversing I told them about a faery path that runs diagonally through the field the new house was to be built in. I actually showed them its route and a few strange looks passed between them, although they did say to me they would try to avoid the path.
Well, by the time the ground floor was built my wife had seen figures moving about at night time and when the top floor was erected I too saw figures moving past the window openings and also heard doors being slammed from inside the building, all very well except that there were not any doors in the place at that stage and nor was the roof on.
This is the third winter now the completed house has stood empty and that is bad luck, more so because the builder was taken ill just after he had finished building and has since died.

In similar fashion faery trees ought never to be cut down because it is said the person who does so will have bad luck. I have been told that years ago if one of those trees needed to be cut then a man from England would be invited over and paid extremely well to do the job!

Today we, who are pagans, have no fear of the faerie. In fact rather the opposite is true, for we welcome them to be with us when doing ritual, accepting and acknowledging their presence as being part of the normal order of nature as much as the birds that fly overhead. Consequently we have no iron or steel in our rituals or in the circle for the faerie abhors that metal and I will never do anything which is against them.