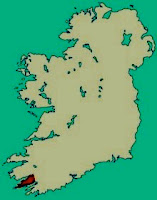 It is my philosophy when taking a few days holiday, to make the journey as interesting as possible by taking the scenic route and to avoid as far as possible the motorways. This I can do when visiting most of my favourite areas especially the Bheara Peninsula (of which 4/5th's are in Co.Cork and1/5th in Co.Kerry) From home it is approximately a 350 km drive and the time it takes is of little importance.

To some this area is also known as The Ring of Beara, no matter the name that is put on it, Bheara has an atmosphere all of it's own and to me it feels like a warm island that is full of friendship and surprises. From B & B's which serve delicious breakfasts, to those who have a lamb grazing the lawn, to some that only rent a bedroom with no breakfast. 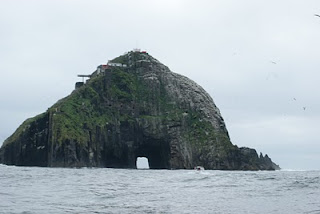 Around every corner is a different view, some roads twist steeply up mountainsides and one in particular has a magnificent view of Bull Rock, otherwise known as The House of Donn (Teach Donn).

In Irish folklore Donn is the underworld god of death, who told his people to come to his home after they had died. Bull Rock has a sea tunnel, through which the setting sun shines and it is via the pathway of the evening sun that the newly dead find Donn's home.

Close to Ballycrovane Harbour is a tall megalith whose top two feet pops up over the rocky strewn hill as you round the bend. We have visited this standing stone quite a few times and it is reputed to be the tallest in Europe with a height 5.3 metres. 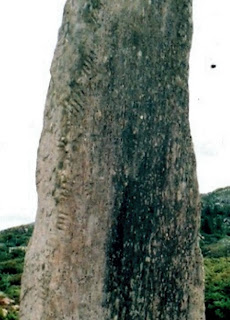 It is not just a standing stone but an Ogham Stone on private land where the land owner charges a small fee of €2.00 (or did) to every visitor. Ogham is the earliest form of script in Ireland and comprises of a series of lines which pass through a vertical stem line to the left, right or diagonally across. Ogham is read from the bottom upwards. Normally the inscriptions are carved on the corner of a stone, however on the Ballycrovane stone they are in the middle of a plane surface which suggests that they were added after the stone was erected. 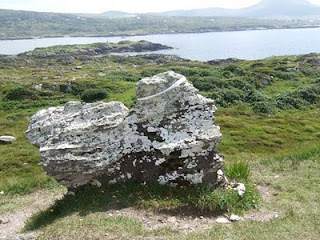 A couple of miles or so past the Ogham Stone and standing on a seaward facing hill is The Cailleach Bheara called by some 'The Hag Stone' or 'The Wise Woman of Beara'.

This stone is venerated by visitors from all over the world, they adorn her with ribbons and leave offerings in her wrinkles (crevices).

The stone its self is an erratic meaning that it is not native to the area.

A painting by © Jane Brideson depicting

The Cailleach of Beara.

She The Cailleach is the Divine Feminine, the oldest goddess of this island and like every remarkable figure she can be found all over the land as well as in Scotland, the Isle of Man and England.

The peninsula is renown for it's megaliths and folklore at every visit I learn or see something new.

I believe it is that plus the people that keep drawing me back and I yearn to make another visit .