On a sunny day while frost still lay on the ground in early January, we made our first trip of the year.

We had two reasons for going: One to meet an eccentric character known affectionately as Jim the Bee and secondly to visit an unmapped circle of stones, which a friend had spotted while out and about.

What we did not know at the outset was how the two were inextricably linked.

We spent a happy two hours or more in Jim's home drinking tea and talking of the things about which we had a mutual interest. People's bookcases are always a good lead into conversations and in Jim's library we saw a collection very similar to our own.

During our conversation the subject of sacred sites cropped up or as archaeologists refer to them 'Sites of Special Interest' which are scattered widely throughout this land.

Jim used to work as a supervisor for a government sponsored scheme which brought benefits to his locality in numerous ways via employment and the training of younger persons. This work sometimes included the rebuilding of boundary walls adjoining the roads and the tidying up of overgrown areas.

About a couple of miles from Jim's home was a moderately sized Ring Fort, which had become neglected with numerous self seeded trees and brambles etc.

It was an ideal place for such a scheme to reclaim for posterity.

More was known about this place however: For here was an unofficial burial ground that had been used for generations and right up until recent times, for the internment of unbaptised babies. The Church had denied these special babies burial in the consecrated ground of their cemeteries. 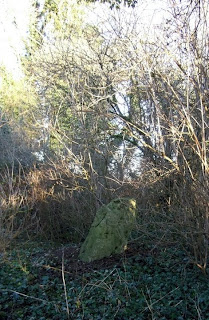 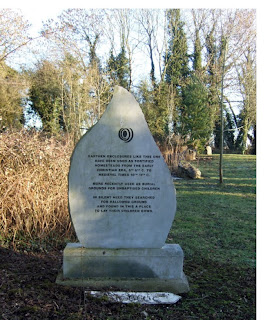 Out of respect for those whose loved one's had been interred in the ring fort Jim created a quiet loving space by collecting and placing several large stones in a circular form.

He also had a large stone memorial plaque in the shape of a flame erected within its confines. 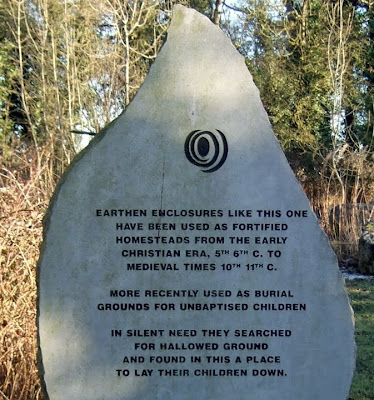 by the community as a memorial to the unnamed.

To me as a pagan All Land is Sacred.