quote : "This is the new year of the old Irish calendar," explained archaeologist Sam Moore. "The event marks the rebuilding of the sun -- the days get longer from this point. It is a time of renewal and hope."

Life is born out of darkness. We as people are born out of the dark womb and into the light, so too is the sun born out of the deep darkness of the year immediately after the long nights of the winter solstice.(Solstice means the sun standing still)

Commonly, the idea is that the shortest day is Winter Solstice, Dec 21st however there are in fact two days of the same length. Each being of 7 hours 29 minutes and 53 seconds. This year many have celebrated WS on 21st December but they could have legitimately done so on the 22nd too!

On the 23rd the daylight increases to 7hrs 30 minutes and 1 second.

I am not sure whether the ancient people of over five thousand years ago would have been capable of measuring such a slight increase but they were certainly able to align the light box at Newgrange so that the sun enters the inner chamber at Winter Solstice.

(The daylight times I have given are only for Dublin) 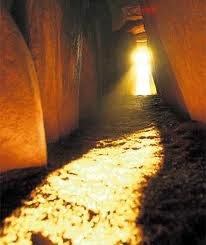 Within some of the many and various pagan traditions are stories relating to that which occurs during the sun's stand still. Some say a form of chaos takes place in the darkness and that the Goddess reforms the world back into order again.In ancient Ireland the sun was seen as feminine, which perhaps gives some credence to that story.

Myself, I always dwell on the darkness within and meditate on questioning my motives during the past year, the pluses & minuses. Finally I welcome in the reborn sun, for doesn't everything look better in the light ?

The picture I have chosen is one painted by Jane Brideson. It depicts the Great Goddess delivering the new born Sun, the back ground is Glastonbury Tor in Somerset. In the foreground is the Glastonbury Thorn that flowers twice a year, depicted here on Wearyall Hill, believed to have been planted by Joseph of Arimathea. Sadly some misguided person or persons have recently attacked this old tree and it is not known whether it will survive to flower again.