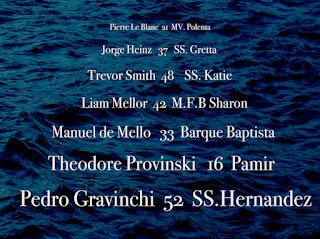 I had a strange experience when we were taking a late summer holiday in Ballyvaghan in Co.Clare. One clear, sunny day I sat looking at the sea at high tide, the only movement was from the waves as they ended their journey and gently touched the shore.

I became aware that there were lines of greyish-white floating on the water. As I looked more carefully I saw it was script and could make out names, numbers and even the names of ships in some of the lines.

The majority of names were foreign ones, though mingled between them were the more recognisable Irish and British names. Nearly all of these names had numbers, such 23,16, 78 and 52 next to them which I presumed were ages. In some cases names of ships also followed.

Hundreds and hundreds lines of names were floating towards the shoreline and disappearing in the slight foam as it touched the beach.
This vision went on without stopping for an hour and a half, until I just had to take a break and go indoors for a cup of coffee and biscuit where I shared my experience with my companion.

About an hour later I returned to the car for a pipe of tobacco.
Surprisingly my earlier ‘vision’ was still there, the script was identical in style although the names were different.

The next day when I looked at the sea at high tide the vision was still there only this time,
I was unable to decipher the language for it was written in an oriental language similar to Chinese Hanzi.
My conclusion is that my vision showed the names of people who had been drowned at sea and whose bodies were never recovered.

Water has memory, an idea first propounded by Samuel Hahnemann, a 18th-century German doctor and then debunked by scientists of the day and sadly by some today.
However, in the 1980’s Dr. Jacques Benveniste proved that water does indeed have memory. Unfortunately Dr. Benveniste died before any awards could be made but Prof. Luc Montagnier, Nobel Prize Laureate, has taken on the formidable task of following the pioneering work of Beneviste.  Once again it has been proven that water has the ability to reproduce the properties of any substance it once contained.  In other words - water has memory.

Back to my vision - what then caused me to see this?
I have no answer, nor do I know if others have had the same experience.
This experience did lead me to construct a poem from my vision

I watched in awe a million names drift ashore
grey white words floating on waves
To become absorbed gently on the foreshore
and beached at last for evermore.

Written in old unused script
names foreign unknown
from long ago and yesterday
The lost un-coffined ones.

Mourned and perhaps still loved
beneath the waves they lie deep
In the oceans depths untouched
No flowers for their graves.