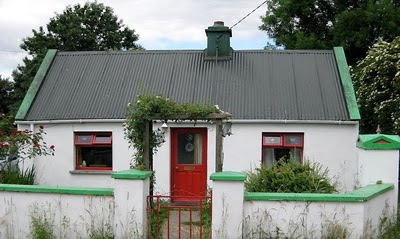 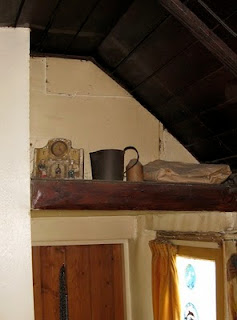 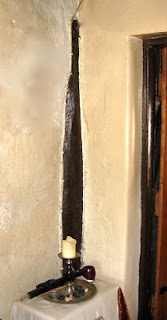 The doldrums is a nautical term for an area of the ocean where the air rises and there is no wind, the term was coined by the seafarers of sailing ships. Therefore to be in the doldrums is an expression of having no movement and that is where myself and Mrs Heron are today.

The builders are due soon, firstly to erect scaffolding and then to put a new roof on this bijou cottage, not a big job. We are also to have new windows and a draught proof front door. Which I will enjoy for the last few winters, when the winds were from the north east, I sat with a rug around my head and shoulders. Fortunately we only get the wind from that direction a few days of the year.

In the meantime we have been doing some research on how long this place has had an iron roof. We used the on-line Census for 1901, identified our place and how may people lived here plus their names of course. In those times it had a thatched roof above stone walls and then we visited the 1911 Census to discover that the thatch had been replaced with corrugated iron and a different family was installed.

Which means for approximately 100 years it has remained with the same type of roof covering.

There are two distinct features inside the front room, called here in Ireland the kitchen. One is the wooden post in the corner, through which a ley line passes. I was told this post was the remains of a faery tree that was built into the cottage rather run the risk of cutting it down and receiving bad luck. The other feature which can be found in traditionally built cottages (modernly described as 'vernacular architecture') is the sleeping shelf above the front door. Up there would have slept the passing stranger or traveller. The shelf is approximately 6 feet long x about 20 inches high x 30 inches wide, suitable for a rather slimly built person !

Today it is a hideaway for odds and ends. The jug-like container in the foreground is yet another product of the Tinker, just as was the copper scuttles in an earlier blog.

The original building had two rooms: a sleeping room for the parents and the kitchen, which was fitted with settle beds that closed up in the mornings to provide bench like seating. In this confined space, a family of 6 children and their parents lived. It was from one of the sons of the family that I bought this cottage. By then an extra room had been added at the rear and I added more. I also dowsed and found a source of water within a few feet of the rear wall, a bore hole was drilled and water was brought into the cottage from the well by an electric pump.

The previous owner came visiting as soon as all facilities were connected and to him I gave the honour of using every item in the bathroom. He sat with me when I lit the stove and kept touching the pipes from the back boiler to feel the gradual heat that was emanating from them, as hot water flowed into the copper cylinder situated in the hot press. The year was 1991 and eighty years on from when his parents first moved in.

It is very hard now to imagine the privations that the family went through during the course of their lives here, such as walking a quarter of mile down the road to the communal well in all winds and weathers frequently throughout the day and every day of the year.

This is a cosy warm home in the winter and a cool one on hot summer days. Strangely when it rains it is not as noisy as you might imagine and when it snows there comes a soft swishing noise. It can be though quite worrying in high winds, for there is always a fear of a sheet of iron breaking loose and letting the rain enter through our wooden ceilings. All of these things we will miss and that is sometimes the price of modernization, in that we cut ourselves off from the natural world.