Our local river has for many a year caught my attention. It is twenty-five years ago that I first took over this small cottage on Monday13th May and no happier man would have been found on the whole of this island than me that day. A roof over my head belonging to no one else, mine to do with in whatever way took my fancy - a home of my very own.

On warm summer days I would take a day off and walk down to the meandering River Barrow and find for myself a cosy place on it's banks where I was able to sit out of sight from anyone. Remove from my rucksack a bottle of wine, sip away and enjoy the day, all the while listening to the sounds of nature that surrounded me.

A few days ago I went over the bank to pay my respects to Berbha, she who is known to be the Goddess of the River Barrow and perhaps it is from her that the name originates, well that is the suggestion in the Annals of the Four Masters written in AD 996. There are others who think and believe otherwise that the name has it's origins elsewhere and is an Anglicised form of a word in Old Irish for boiling that links to the goddess Morrigan. 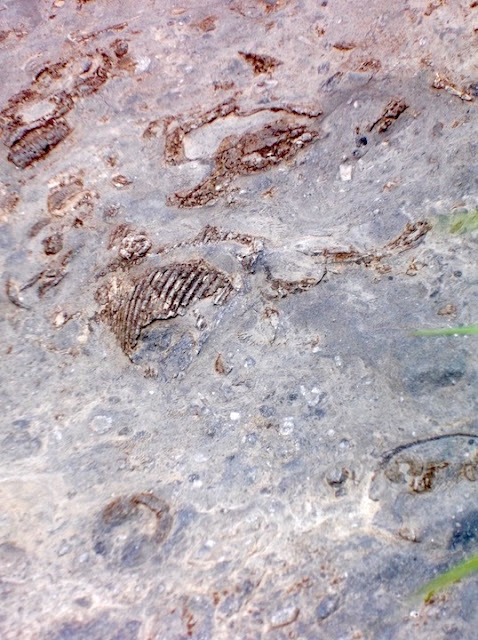 Bedrock at the side of the Barrow
which I was taking a photo of above. You cannot but see all of the fossils
So from what part of the world is their origin?
Well according to the geologists the mud that captured
them
was once a river bed in Africa .