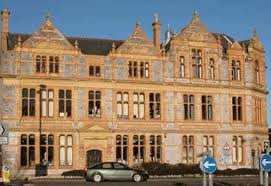 I started the day by thinking about my first job and of how it shaped my life in various ways. My working life started in a small shipyard, Morgan Giles Ltd, in Teignmouth, Devon.
Before going into the shipyard I attended Newton Abbot College of Art and all was going well until a family crisis occurred in 1959 and I was sent out to work. My first wage was £2-15 shillings a week and after I signed my Indentures it was reduced to £2 - 9 shillings for a 48 hour week. 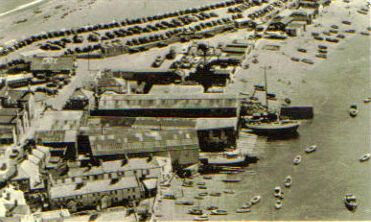 I was apprenticed as a Marine Engineering Draughtsman and spent the first two half years on the shop floor in various departments, starting in the fitting shop. My very first job there was to polish the bronze propellors of a 52ft Monaco Cruiser which was being readied for the International Boat Show at Earls Court in London. The firm designed and built it's own trailer to carry the boat which was to be towed by a heavy tractor, of the type that Showmen use; because of it's size and slow speed a special route had to be found to avoid low bridges and tight bends. Shipyard workers walked alongside the trailer. It took five days and countless pairs of shoes to transport the cruiser to London! 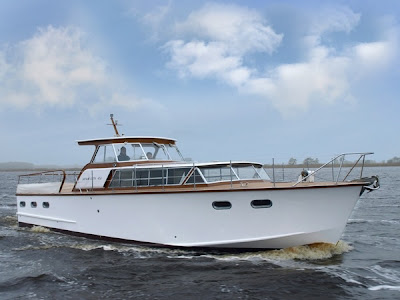 The Monaco Cruisers were luxury motorboats with an impressive turn of speed,built and fitted out to a high specification. They came in three lengths 36ft,42ft (later a 48ft) and 52ft and powered mainly by Caterpillar diesels.
All of the fittings and furnishings were designed and made by us, for example the double ended fridges and electrically warmed toilet seats for those with delicate posteriors. One regular customer always had swiss silk curtains, another always wanted his boat to be a foot longer than anyone else's, so a 36ft became a 37 ft & of course he would be charged for our inconvenience. However, one year this customer wanted a 42ft craft to be extended to 43ft which made life extremely easy for the design team because our 42 footer was actually 42ft - 10 and 1/2 inches long. We merely redesigned the bow roller plate out by one and half inches. I have no idea how much extra he was charged for those one and half inches!


Today I spoke with Jos Moorman in France who recently spent ten years equalling 12 thousand hours restoring a 42ft Monaco Cruiser, which I helped to design. He has done a magnificent job & you can see her here if you paste this into your browser > 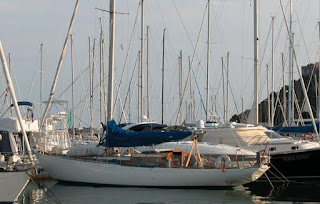 We also built various yachts for private owners and many types of inshore craft for the Ministry of Defence. The six years that I spent at Morgan Giles were not wasted and all that I learnt there has stood me in good stead throughout my life. 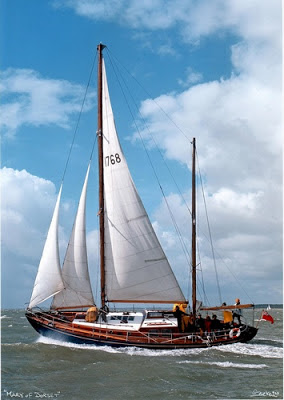 On the site where the shipyard once stood now stands a block of luxury apartments with superb views of the River Teign and the English Channel . I often wonder whether late at night any of the occupants hear the ghosts of the old shipyard men still working away because I often revisit the yard in my dreams.