The character of any town is in it's architecture, colours of buildings and the variety of business premises. I am unable to show them all, so I have made a selection in the hope that it will give you a flavour of the town. 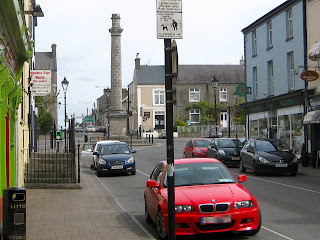 Emmet Square sits at the start of the town 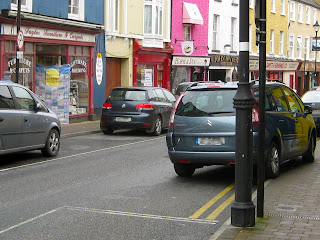 There is always one who tempts the wrath
of a traffic warden. 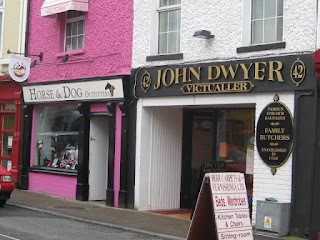 The Horse & Dog Outfitters being next door a victualler always brings a smile to my face, for my imagination always conjures up a picture of a portly well fed & groomed dog strolling down the street in top hat and tailed coat smoking a cigar. 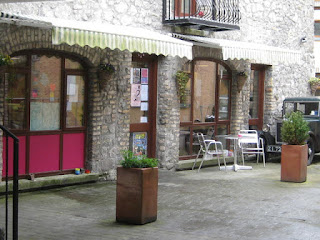 Bia Licious is a wonderful eating house who serve freshly baked food on the premises,it is tucked away in a quiet courtyard with chairs and tables outside plus a eye-catching vintage Austin Seven. It was in this cafe that my wife spotted the waitress as being an ideal model for her painting of the Goddess Anu, which is now three quarters finished. 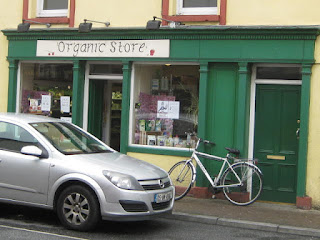 The Organic Store is a great attraction and always receives a weekly visit from us. 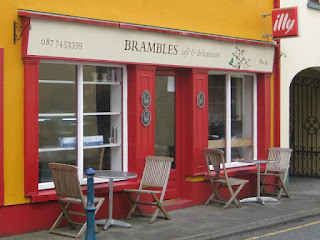 Brambles is owned and managed by Ms Delahunt who has keen sense of wit and a fascinating surname; Besides serving delicious food and the best coffee in Ireland!

Delahunt: the first two syllables might suggest a French origin however Delahunt is an anglicised version of the pre-tenth century gaelic name O'Dulchaointeach, a name composed of the elements 'Dul' meaning satirist and 'Caointeach' meaning keening song
The satirists were part of the ancient druidic caste and to be specific they were part of the Filidh/Fili who had many grades of members, from the highly educated poets, musicians and satirists to the lowly uneducated baird /bards. Satire in ancient times was capable of reversing the fortunes of a Chieftain's status and therefore it paid to keep the Druids and Filidh well fed when they came to visit. 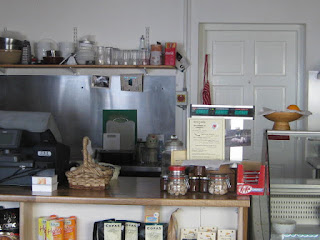 The sparkly interior of Brambles 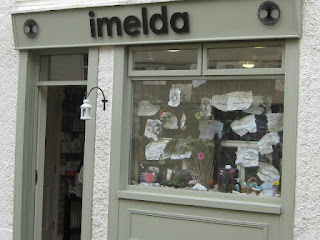 Imelda is a ladies hairdressers with an eye catching and unusual window decorations, in the form of handwritten messages and drawings that change to celebrate every season. The street that it is in seems to have a proliferation of mens barbers and women's hairdressers. 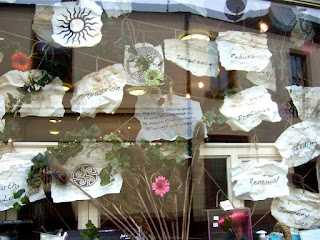 A close up of Imelda's messages