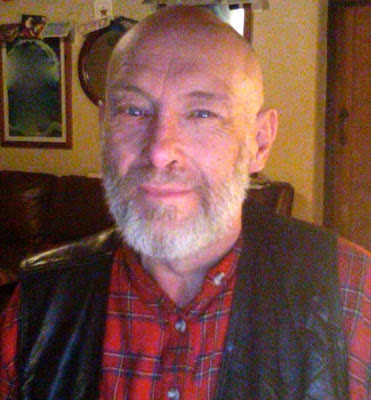 Photo taken night of 8th after having be shorn !

I am 69 years young today and was born in Loveday Street Children's Hospital, Birmingham on January 9th at 5.20 a.m. in1943. Memories of that achievement no longer remain - that's if they ever existed.

My earliest memory is of sitting in my pram and a young girl asking my mother if she could push it, my mother said "no" but she could assist her by holding on to the side.

A very distinct and perhaps dark memory is of being carried past the walls of a bombed out building, which I believe was the Prince of Wales Theatre which was destroyed in April 1941. Another is of seeing a tin helmet with a khaki gas mask bag hanging on the newel post at the foot of my parents stairs, on the floor adjacent to the post was a large canvas bag full of rosy red apples and next to them stood an army rifle. I also remember sitting on my mother's lap at the children's street party that celebrated the end of the war.

Strangely, after all those years, there is one noise at night that wakens me in seconds: that of a propeller driven aircraft flying overhead.

As a child the bomb sites were one of our favourite places to play as long as they were out of our parents' sight . Each and every site seemed to be covered in Buddleia, so much so that the plant & place became associated; in my mind and I thought that the authorities had deliberately planted them there. A great surprise awaited me some years later, to find the plant growing profusely on the banks of a river in a country that had not been in the war.

We departed from the Birmingham area in 1946 and moved to live in Somerset. That move heralded a whole host of further moves in which we lived in different places and many houses, some only for a few weeks and some for a few years; I did a count up and found I had lived in 14 houses and six places between the time I was born and fourteen years of age, I often wonder if one of my parents had gypsy blood.

It was hardly any wonder therefore that roaming became a way of life for me too later in life. Even today I get the urge to go off in the car and travel to somewhere different, the journey itself is as much part of the cure as arriving at a destination.

Today I shall celebrate this special occasion by having lunch with Mrs H and a friend, in one of our favourite restaurants by driving across the countryside to a near by town.