I have been thinking about space the last few days and of infinity. I can get my head around it alright, even though the concept of endlessness is amazing.

The first time that I ever attempted to understand what it was all about, was many years ago when I visually put all of the universes in a box and then realized ok so what is on the outside of the box - more space was/is the answer.

The Large Hadron Collider has done some real business recently by colliding lead ions together or rather head on, at almost the colossal speed of light and in doing so the impact manifested temperatures a million times hotter than the centre of the Sun. I wonder just how they dispersed the heat energy. Answers on a postcard please.

I have been having problems with a small space my self just recently. It all started when I was up in the loft and noticed a small cloud of smoke drifting upwards to the skylight. Now it is quite a common sight to see smoke up there, for I do enjoy a few puffs on my pipe while sitting quietly on a bench and musing on what to do next. This particular time although the pipe was in my pocket the lighter was not.

Not my smoke, this was coming from the chimney breast. I removed the fire from the stove & made a phone call. My builder returned in rapid time and rendered the brickwork.

The following evening I re-lit the stove and smoke started to enter the ground floor rooms, again I took out the fire & phoned himself. We spent the rest of the evening stripping out the alcove press (cupboard) that adjoins the chimney breast. This revealed a series small sooty cracks and soot stained walls, the same procedure as before was followed and this time we were totally successful. 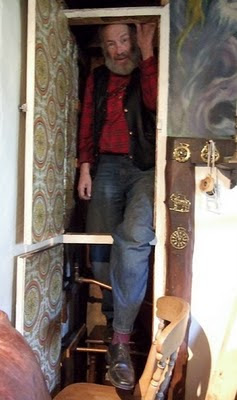 Getting in is similar to Leaving

All I have to do now is rebuild the shelving that I had hastily removed and emulsion the walls. There is a slight problem caused by two pipes that go across the bottom part of the press making access difficult. And I am so glad that I started off my working life in the confined spaces of yachts and small ships. So re-building the press is rather like going back in time for me.

These days in Ireland you never know who you will find in a press.For recently our former Taoiseach Bertie Ahern made for himself a pile by doing a commercial for the Irish News Of The World. He is the actor who says "I never thought that I'd end up here"

So following in Bertie's footsteps or better still my version of Sylvester Stallone in the 1970 film 'No Place To Hide' which I have renamed 'Dammit You Have Found Me ! ' 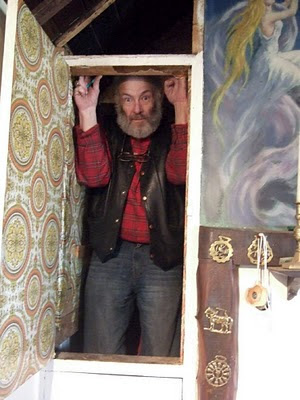