The Seven Wonders of Fore 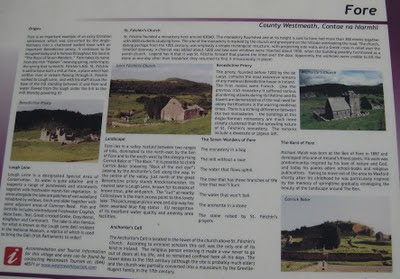 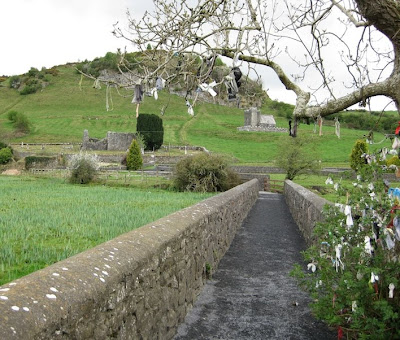 St Féctains church next to the yew tree, the hill behind
is Carrick Balor (Balor is ancient one eyed god) the field
to the left is a water meadow. In the foreground is Féctain's
healing well & Rag tree where the water will not boil,
it is aso the site of a megalithic tomb. 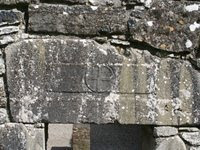 The stone lintel that was lifted by the power of prayer 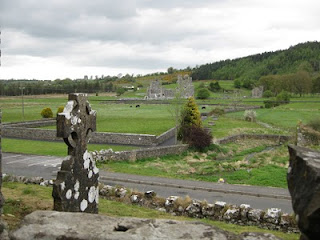 Photo taken from window hole in St Féctain's church,
the Mill is a small stone building on the right 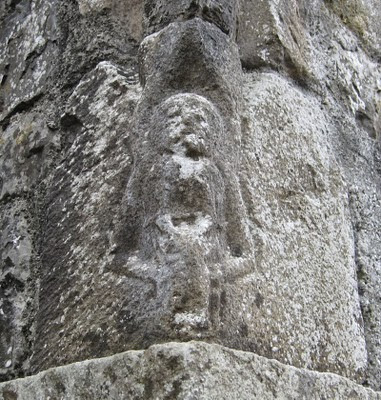 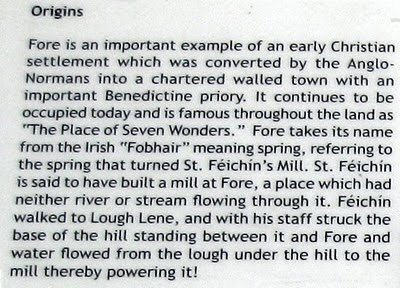 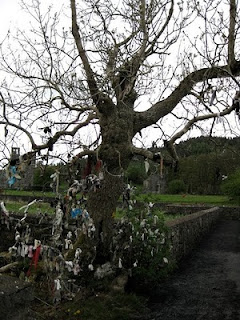 The Rag tree at Féctain's well it is
actually an Ash. 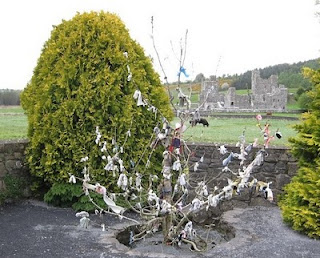 The tree that will not burn 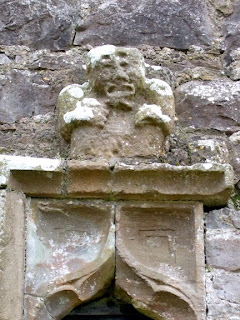 Sheela na-Gig at St Munnas Church
Before Munna became a Christian
he was a Druid apprentice under the tutelage of his father.

Last weekend I had every intention of writing about The Hill of Tara and of showing you pictures from angles which are not normally shown. Alas, I went to Tara on Tuesday of this week with two others, who like myself normally carry a camera and guess what ? It was one of those days when the three cameras were left behind.

Wednesday afternoon, it being so very sunny, we made a trip to Fore [Fobhair] in Co.Westmeath which nestles in an airy valley between high stony hills. There is something very precious about Fore, in that on leaving I always feel as if I have had a long holiday; even though my stay there was only for two hours.

On reflection I think that it might have something to do with the water that flows rapidly through a large water-cress meadow.

Fore is unspoilt by commercialism, given that its' former glory was as an early Christian stronghold of St Féichin - his name means Little Raven. The Seven Wonders of Fore are all connected to him in some way, these being :-

2. The Mill without a race. Féichin built the mill and then walked to Lough Lene struck the bottom of the hill that stands between it and the waters flowed into Fore.

3. The water that flows up hill. This is an optical illusion of course, though it does appear that way until one looks at the lay of the land

4. The tree that won't burn. It would if you were brave enough to face the consequences of burning a tree with a cure.

5. The water that won't boil. Similar to 4 above, the waters can be bathed in for healing purposes only and one would have to face Féichin's curse if you removed any.

6. The anchorite in a stone. This refers to a stone tower on top of Carrick Balor.

7. The stone lintel raised by prayer. It is said that the builders became exhausted trying to position the huge stone, so they stopped work for refreshment and when they returned it had been perfectly positioned by Féichin using the power of prayer.

The 8th wonder for me was the Sheela na-Gig carved into a coinstone that we saw in Féichin's church.

On the way home I became fed up with the behavior of other road users who were tailgating me, whilst others were simply dangerous drivers, so I turned off onto a narrow country road to connect with another route home. It was on this narrow road that we came across St. Munnas church, a very untypical design for a church, having a Norman style rectangular three storied tower (known in Ireland as a Norman fortified farmhouse) attached to the church. Above one of the windows there was yet another Sheela na-Gig.

Sheela na-Gigs in situ are rare finds in Ireland for most of them have been removed to The National Museum in Dublin where the majority are stored in the cellar and rarely see light of day, the public display of them is rotated so we are told and permission has to obtained from the Curator to view the majority.

My travels for this week are not yet finished, for on Saturday we will be driving to Carna in Connemara, Co. Galway for The Joe Heaney Commemorative Festival of Traditional Singing & Music. Where pride of place is given to Sean Nós singing which is unaccompanied and has a highly ornamented melodic line.